In a recent issue of the Long Island Business News, a column by LIBN columnist Bernadette Starzee titled 'The Green Team' featured comments by Jay Best, CO-Founder of Green Team LI. Below is the column in its entirety. 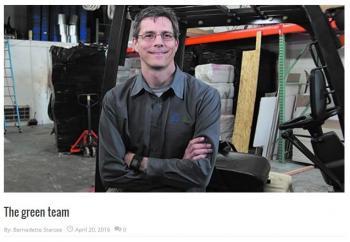 Long Island’s homes are largely inefficient. But while homeowners from Mineola to Montauk think it’s a good idea to make upgrades to cut their energy bills, multiple efforts to get them to do so have failed to win mass adoption.

The latest attempt is the Long Island Green Homes Initiative, a partnership of four nonprofits and five towns, which are working with local contractors and a state grant program to help homeowners make energy-saving upgrades.

While organizers know they face many challenges – chief among them is inertia – they say they’re addressing some of the issues that have caused other programs to fall short.

Officially launched last November, the initiative is housed at the Sustainability Institute at Molloy College. The institute is partnering with nonprofits Community Development Corp. of Long Island, LI Green and United Way of Long Island, as well as the towns of Babylon, East Hampton, Huntington, North Hempstead and Smithtown.

The participating towns receive funds to spread the word to their residents, but all Long Island homeowners are eligible to participate in the program.

The initiative arranges for homeowners to receive a free home energy assessment from a local contractor, which is paid for through New York State Energy Research and Development Authority grant funds. From the assessment, homeowners are given a list of improvements they can make, with an emphasis on those upgrades that will give them the best energy-saving bang for their buck. Long Island Green Homes will also connect participants with low-interest-rate loans in addition to guiding low- and moderate-income customers and those with central air conditioning to additional grants and rebates that they qualify for.

energy-efficient,” said Neal Lewis, executive director of the Sustainability Institute. “About 50 percent of Long Island homes were built before we even had an energy code, and 30 percent of all homes have heating systems that are 30 years or older.”

The New York State Energy Conversation Construction Code of 1970 required certain standards for insulation and other factors in new constructions, and it has been made more stringent over the years.

Making homes more energy-efficient would not only benefit homeowners’ pocketbooks, but it would decrease greenhouse gas emissions while stimulating the local economy, Lewis said.

“Everyone who looks at this issue sees it as win-win-win,” he said. “Homeowners who have an extra $1,000 in their pocket that they’re not wasting on energy bills will be able to spend it on things like going out to dinner. And if you’re getting work done in your attic, it has to be a local company – you can’t outsource it.”

Homeowners agree that going green is a good thing.

“We never get someone that says, ‘No, I don’t want to make my home more energy-efficient,’” Lewis said. “But sometimes it’s not the highest priority. Everyone has so many things to deal with in their busy lives; this is on their list, but it’s not on the top of the list.”

As upfront costs are also an issue, this program, like others before it, includes access to low-interest-rate loans, allowing homeowners to make improvements at little or no cost upfront and pay the loan back from energy savings.

Unlike in recent years, the latest initiative has to deal with the added challenge of motivating consumers when energy costs are relatively low.

“It has been a tough year, with the warm winter and low gas and oil prices,” said Chuck Green, director of LI Green. “We’re not seeing the same growth within this industry that you saw in recent years.”

In designing the latest program, however, organizers studied other reasons why energy-efficient programs have struggled nationwide.

“One factor is, whenever you’re dealing with a government program, it can be complex – you have to go to a website and figure out what information you have to put in and what you need to qualify,” Lewis said.

Long Island Green Homes responded by establishing a call center and bringing in “energy navigators” – folks who are knowledgeable about energy – to guide homeowners through the program.

The energy navigators also give participants objective advice about which upgrades to make.

“If you go to a window salesperson, they’re going to say you need windows, and if you go to a boiler salesperson, they’re going to say you need a boiler,” said Schwartz, who serves as an energy navigator. “We act as a clearinghouse – we’re like your uncle or brother-in-law who knows construction, and we can give you feedback on the proposals you get. You can call us and say, ‘Chuck, what are your thoughts? They’re saying my house is drafty and they’re concerned about high carbon dioxide.’ I can help them understand what’s important and what’s not as important.”

The group also vets participating contractors, starting with a list of those approved by NYSERDA for having the right certifications and experience and then paring it down further. Contractors are evaluated on an ongoing basis for factors such as timeliness and quality of work, Lewis said.

Since November, more than 500 homeowners have signed up for free energy audits through the program, and many have gone on to make upgrades, creating work for a dozen local contractors.

“It’s a terrific program,” said Jay Best, founder and CEO of Green Team LI, a contractor based in Islandia that has done home energy assessments for more than 40 program participants since November. According to Best, “a good percentage” of those receiving the audits have gone on to make improvements.

“The program is helping to create a market and facilitate transactions that make sense,” he said. “Homeowners at the end of the day are going to make those improvements that make financial sense, but there’s a need to build awareness that this program is available.”

Best said partnering with organizations like the Sustainability Institute and the towns lends a credibility factor.

“As an independent contractor, we could tell people the same thing, but when these organizations say it, sometimes it’s more believable,” Best said.

Contractors in the program take a holistic approach to assessing the home, Schwartz said.

“If for instance it’s always cold on the second floor, they’re going to figure out why,” he said. “They start with an energy audit and come up with a plan.”

NYSERDA pays contractors $250 per audit for most homes and $400 for homes over 3,000 square feet. The funds cover little more than the cost of the audit, but contractors who do the audit have the first crack at making a proposal to the homeowner.

However, there is no obligation to go with the initial company, or to do any work at all.

“People have complete freedom to do whatever they want,” Best said.

Most of the projects done to date have focused on insulation and air sealing – low-cost, high-impact improvements.

“Long Island is mostly older homes, and caulking and tightening the house up and putting insulation in attics and crawl spaces goes a long way in reducing energy bills,” Best said.

Find Out What Actual Green Team LI Customers Have to Say About Us: